The Iowa Community College Athletic Conference named Klimesh the September 21-27 Athlete of the Week in recognition of her back-to-back 96 and 97 scores in competition. 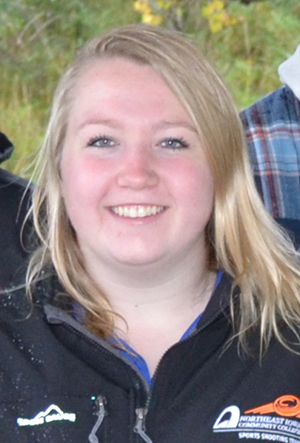 The Iowa Community College Athletic Conference named Klimesh the September 21-27 Athlete of the Week in recognition of her back-to-back 96 and 97 scores in competition. In both meets, Klimesh also scored the highest of any athlete competing that day.

“I was very surprised when I found out that I was named Athlete of the Week. My favorite thing about competing with our NICC team is being able to have fun and not make the competitions about winning. I also like being able to compete with cool teammates,” Klimesh said.

The NICC athlete developed her trapshooting skills through many years of practice and persistence. Her goal is to become a very competitive shooter. “My father was also my head coach throughout my high school career, so he pushed me to become better; without him pushing me, I wouldn’t be as competitive as I am today,” she added.

The fact that NICC offers the sport influenced Klimesh’s decision to enroll at the College.

“I wanted to go to a community college that has trapshooting, and it’s nice because the campus is only 20 minutes from where I live,” Klimesh explained. She is currently enrolled in the Associate of Arts program at the Calmar campus.

“It was a little windy but not as bad as last week. I have gotten used to competing with the wind, so I have adapted to the conditions. Great outcome overall,” said NICC athlete. Zach Schroeder

“This week we faced off with a tough and talented Indian Hills team. Even though we did not come away with a victory, our team keeps improving. Once again Kaylie Klimesh scored the highest out of all the competitors. We have added a few more student athletes to the team and other athletes keep showing improvement. So, I am very optimistic in the direction our team is going, and about all our student athletes getting out on the range and giving it their all to improve their skills and stay competitive,” Anthony Sisneros, NICC head coach, expressed.

The NICC team, 1-2 this season, will face Iowa Central Community College next on Saturday, Oct. 3.

For more information about the Sports Shooting team at NICC, visit www.nicc.edu/sportsshooting.